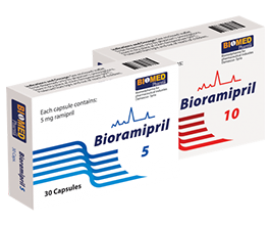 ACE is identical to kininase, an enzyme that degrades bradykinin. Whether increased levels of bradykinin, a potent vasodepressor peptide, play a role in the therapeutic effects of Ramipril remains to be elucidated.

While the mechanism through which Ramipril lowers blood pressure is believed to be primarily suppression of the renin-angiotensin-aldosterone system, Ramipril has an antihypertensive effect even in patients with low-renin hypertension.

Following oral administration of BioRamipril, peak plasma concentrations of Ramipril are reached within one hour. The extent of absorption is at least 50-60% and is not significantly influenced by the presence of food in the GI tract, although the rate of absorption is reduced.

Ramipril is almost completely metabolized to ramiprilat, which has about 6 times the ACE inhibitory activity of ramipril, and to inactive metabolites. After oral administration of ramipril, about 60% of the parent drug and its metabolites is eliminated in the urine, and about 40% is found in the feces (may represent both biliary excretion of metabolites and/or unabsorbed drug).

After once-daily dosing, steady-state plasma concentrations of ramiprilat are reached by the fourth dose.

In patients with creatinine clearance less than 40 ml/min/1.73m 2 , peak levels of ramiprilat are approximately doubled.

In patients with impaired liver function, the metabolism of ramipril to ramiprilat appears to be slowed, and plasma ramipril levels are increased .

·         Treatment of  patients who- within the first few days after an acute  Myocardial Infarction- have demonstrated clinical signs of  Congestive heart failure.

·          reduction of need for revascularization procedures in patients with an increased cardiovascular risk such as manifest coronary heart disease ( with or without a history of myocardial infarction), a history of stroke, or a history of peripheral vascular disease .

Bioramipril  must not be used in patients with

·        If angioneurotic odema  occurs during treatment, Bioramipril must be discontinued immediately and if the tongue, glottis, or larynx  are involved emergency measures taken .

( hypovolaemia) , or salt deficiency should be corrected before initiating treatment .

( leucopenia ) can be detected.

Bioramipril  must not be taken during pregnancy . Otherwise there is a risk of harm to the fetus.

Lactation, breast-feeding must be avoided  during treatment with Bioramipril .

Diuretics:    Patients on diuretics, especially those in whom diuretic therapy was recently instituted, may occasionally experience an excessive reduction of blood pressure after initiation of therapy with ramipril. The possibility of hypotensive effects with ramipril can be minimized by either discontinuing the diuretic or increasing the salt intake prior to initiation of treatment with ramipril. If this is not possible, the starting dose should be reduced.

Potassium supplements and Potassium-sparing diuretics:    Ramipril can attenuate potassium loss caused by thiazide diuretics. Potassium-sparing diuretics (spironolactone, amiloride, triamterene, and others) or potassium supplements can increase the risk of hyperkalemia. Therefore, if concomitant use of such agents is indicated, they should be given with caution, and the patient's serum potassium should be monitored frequently.

Lithium:    Increased serum lithium levels and symptoms of lithium toxicity have been reported in patients receiving ACE inhibitors during therapy with lithium. These drugs should be coadministered with caution, and frequent monitoring of serum lithium levels is recommended. If a diuretic is also used, the risk of lithium toxicity may be increased.

Other:    Neither ramipril nor its metabolites have been found to interact with food, digoxin, antacid, furosemide, cimetidine, indomethacin, and simvastatin. The combination of ramipril and propranolol showed no adverse effects on dynamic parameters (blood pressure and heart rate). The co-administration of ramipril and warfarin did not adversely affect the anticoagulant effects of the latter drug.

Treatment or Management of Overdose

Primary detoxification : gastric lavage , administration of adsorbents , sodium sulfate ( if possible during the first 30 minutes ) . In case of hypotension , administration of ( 1- adrenergic agonists and  angiotensin II) must be considered ,in addition to volume and salt  substitution .

The recommended initial dose is 2.5 mg once daily. Depending on the response,  The dose may be increased . Any increase should be implemented by doubling the dose at intervals of 2-3 weeks. The usual maintenance dosage range is 2.5 to 20 mg per day , the maximum dose is 20 mg daily .

the recommended initial dose is 1.25 mg Bioramipril once daily. Depending on the response,  The dose may be increased . Any increase should be implemented by doubling the dose at intervals of 1-2 weeks . The required daily dose, if equalling or exceeding 2.5 mg, may be taken as a single dose or in two separate doses . the maximum daily dose is 10 mg.

The recommended initial dose is 5 mg daily , divided into two single doses of 2.5 mg each one in the morning and one in the evening . If this dose is not well tolerated, . 1.25 mg should be taken twice daily over two days. In either event, depending on the response , the dose may then be increased . Any  increase should be implemented by doubling the dose at intervals of 1-3 days . As treatment progresses , the total daily dose may be taken as a single dose.  The maximum daily dose is 10 mg .

The recommended initial dose is 2.5 mg, once daily. Depending on the tolerability, the dose is gradually increased. The increase should be implemented by doubling the dose after one week, Three weeks later, it should be doubled again to the usual maintenance dose of 10 mg.

Hypertension:    For patients with hypertension and renal impairment, the recommended initial dose is 1.25 mg Bioramipril once daily. Dosage may be titrated upward until blood pressure is controlled or to a maximum total daily dose of 5 mg.

Heart Failure Post Myocardial Infarction:    For patients with heart failure and renal impairment, the recommended initial dose is 1.25 mg Bioramipril once daily. The dose may be increased to 1.25 mg b.i.d. and up to a maximum dose of 2.5 mg b.i.d. depending upon clinical response and tolerability.

The capsules must be swallowed without chewing and with sufficient amounts of liquid ( approx. ½ glass )  They may be taken before, during, or after a meal . It is important to take Bioramipril at the same time every day .

- Ramipril and hydrochlorothiazide treatment of hypertensive urgency in the ED