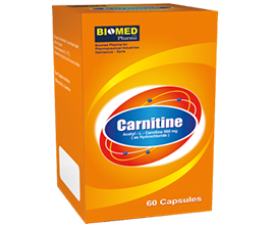 Alzheimer dementia: Acetyl-L-carnitine has a positive effect on the cognitive performance in patients suffering from an Alzheimer-type dementia. The intake of the substance for a longer period of time seems to improve the long-term memory.

Depression: In patients with major depression, acetyl-L-carnitine supplementation can lead to a changed circadian rhythm of the glucocorticoid secretion and an increase of the overall cortisol level. The additional administration of acetyl-L-carnitine can therefore support the treatment of depression symptoms.

Cerebral circulatory disturbances: There are positive results with regard to the use of acetyl-L-carnitine in cases of cerebral ischemia as well as reperfusion. Studies have shown that the administration of acetyl-L-carnitine could reduce the neuro-logic secondary injuries experienced after such events.

Cardiovascular disturbances: Acetyl-L-carnitine increases the transport of fatty acids for ATP production into the mitochondria of skeletal muscles and the myocardium and thus has a protective effect against damage caused by free radicals.

Diabetic secondary injuries: In diabetics, acetyl-Lcarnitine alleviated neuropathic pain and improved the peripheral nerve function. The substance therefore seems to have positive effects on the metabolic as well as the functional disturbances in diabetic polyneuropathy.

Alcohol abuse: acetyl-L-carnitine have effects on the hepatic alcohol degradation by delaying alcohol oxidation. Therefore, acetyl-L carnitine could be of potential use in the therapy of cognitive disturbances in alcoholic disease.

Side Effects and Contraindications:

Take 1– 2 capsules 3 times a day at mealtimes with plenty of fluid.

Keep tightly closed in a dry place; do not expose to excessive heat.